Otara Gunewardene is a Sri Lankan Businessperson and Philanthropist.
Through her work, she continues to commit to responsible entrepreneurship and philanthropy in Sri Lanka. With a total commitment to national interest in all that she does, Otara’s vision is to provide an example and mandate for peaceful progress throughout the island – uniting people of all walks of life with compassion as its driving force.

Otara Del Gunewardene was born on 30th August, 1964 in Colombo, Sri Lanka. The youngest child and only daughter of Delysia and Norman, Otara’s life and spirit have set the foundations for an extraordinarily Sri Lankan story.

Her father, Norman Gunewardene taught her the importance of hard work, the value of consistently striving while adhering to an honourable work ethic in all that she does. Her mother Delysia Gunewardene showed her a world of limitless possibility, herself a woman of her time proving by example that with dedication and compassion, all things are possible.

Along with her two older brothers Ruchi and Ajit, Otara’s childhood took the road less travelled quite literally, with countless family holidays in wilderness areas and many an animal-centred adventure, coupled with school at Ladies’ College and an early love of ballet and sports. Excelling as a young athlete, Otara raced through busy teenage years, reaching young adulthood with a decision to study Biology at the Bowling Green State University, Ohio, USA. Her experiences nurturing animals and volunteering at Sri Lanka’s National Zoo in Dehiwela made her certain of a future in veterinary science but life and destiny had other plans…

Young Otara and her awards for athletics.

Otara, celebrating her degree in Biology with her parents.

Enjoying college life in the USA and heading home for the holidays, it wasn’t long before the world of high fashion beckoned. Soon modelling fulltime, Otara found herself enjoying the design aesthetics of her work, growing in confidence and stature, as both in Sri Lanka and internationally, she became the face and the persona of many a catwalk, fashion magazine, catalogue and billboard.

Otara and the station wagon that launched Odel, 1989.

A chance encounter with a friend in the Sri Lankan garment manufacture industry and a small loan from her brother Ajit and mother led to Otara’s first business venture – selling clothes from the boot of her station wagon in 1989. With a discerning eye, she found clothes manufactured in Sri Lanka that matched international trends and before long, incorporated her first retail store Odel at Dickman’s Road (1999). Odel soon grew to be iconic in its representation of Sri Lanka and expansion of fashion retail.

Otara opened Odel stores across the island – eventually culminating in the flagship store Odel Unlimited in Colombo 7, the first department store in the country. The Odel brand of t-shirt design became a reflection of Sri Lanka’s island spirit, while behind the smile, Otara dedicated her business growth to building the retail capacity of her country, employing thousands, creating careers and skillsets in retail and fashion that still set the bar today.

In 1990, Otara married Raju Chandiram (m.1990-2007 ) and welcomed the birth of two boys, Kiran (1994) and Rakhil (2000). Her life it would seem, was full; as her star continued to rise in the world of business. In 2005 there came another serendipitous meeting, this time with an abandoned puppy on Peterson Lane who changed the course of Otara’s life forever. That puppy was Niko, Otara’s newest family member and soon to be the first (doggy) face of Embark, the Brand that would define her Passion. Through Niko’s story, pain and recovery, she saw the fate of not only one lonely, abandoned street dog but the many he spoke for. She understood then, not only the importance of compassion but that her voice could be used to be a driving force of change in Sri Lanka. 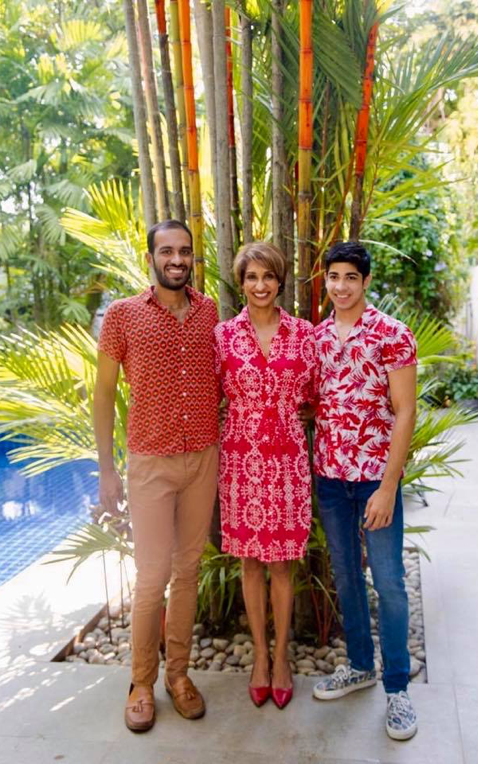 Otara and Niko, the street dog that inspired the brand Embark.

Otara expanded Odel’s corporate social responsibility (CSR) operations toward the rescue, rehabilitation and empowerment of the oft-neglected street dogs of Sri Lanka. Odel’s CSR had already made a significant impact – with environmental campaigns, beach clean ups, tree planting and funding of wildlife conservation projects creating positive change and awareness throughout the island. To align public perception toward a compassionate outcome for a being many considered ‘pests’ would not be easy she knew, when conceptualising the Embark vision.

To make an impact, she aligned her skills in branding toward launching Embark with a line of clothing that personalised the very specific loving, mischievous, independent attitude of the dogs that needed a nation to care. And care we did, as the rise of the Embark brand revolutionised CSR in Sri Lanka – an outpouring of public support led to a thriving operation behind the scenes – one of rescue, medical intervention and long-term aftercare while to the public – Embark gave a new identity and lease of life to the most marginalised of urban society.

Odel continued to grow, with Embark by its side carrying the street dogs along a meteoric rise in reputation and recognition. In February 2010, Otara became the first woman to list her company on the Colombo Stock Exchange as Odel became the first retail brand in Sri Lanka to release an IPO. A partnership with Malaysian retail giant Parkson gave Odel the ability to diversify its reach. At the pinnacle of corporate success, Otara’s business entailed 15 retail stores, including several department stores across the country. Realising that only further large-scale expansion and diversification in retail remained ahead, Otara sold her stake in the business she founded. She exited her corporate life at its peak, taking with her only Embark and its four-legged assistants as she was determined to answer the calling that she could no longer ignore. She had proved with Embark that in a harsh world, her distinct voice and a compassionate agenda could make all the difference.

It was 2015, and it was finally time for the Otara Foundation. The organisation became the channel by which Otara Gunewardene would once again change the scope of the country that she loved, and the voiceless animals in it. Her strong focus on environmental protection, animal welfare, education and empowerment has quietly changed lives, while her Passion remains Embark.

Proud to establish her own identity amongst a sea of conflicting politically-motivated voices, Otara has always structured her interests and lifestyle to reflect her continued growth, within the framework of entrepreneurial and philanthropic leadership. Of particular pride is the zero-corruption mandate she adheres to in all matters. Physically fit, Otara challenges herself in strength training, alongside a focus on holistic living. Largely vegetarian for decades, she now embraces a more plant-based diet and shies away from conventional medicine in favour of the alternative therapies of Avruveda and Homeopthy for her family’s wellness needs. She continues to practice yoga and enjoys clean living – consuming no alcohol or tobacco and embracing the philosophy that is more relevant now than ever: ‘We are what we eat’.

Through it all, Otara takes her role as a mentor for the next generation of Sri Lankans very seriously. She cares about the example she sets, as a woman and as a calm voice of reason, in her often-chaotic island in the sun.

She continues to provide guidance, volunteer initiatives and leadership seminars to young people – nurturing their independence while teaching the importance of compassion in all aspects of life.

Today, Otara’s focus while diverse, remains 100% within Sri Lanka. She balances wise investments and recognised business acumen toward philanthropic ventures, many of which are rarely shared with the public. As the primary national female voice on social media, Otara shares a life that still takes the road less travelled, but these days it is a life that is almost entirely dedicated to philanthropy. Successful, relevant, progressive and at all times kind, Otara’s vision for her country defines her legacy as she continues to strive as she always has, toward being a channel for positive change and sustainable development in Sri Lanka.

Otara as Chief Guest at a leading school in Colombo, 2018.

Celebrating Women and the new year, 2015.

Powered by  - We Are Designers