Otara has been an animal lover all her life. From a childhood full of squirrels, dogs, birds and rabbits, to a commitment to animal welfare made at the age of 18 (as a volunteer at the national zoo) to a degree in biology, Otara has made a consistent commitment to animal welfare. Despite the growth of her retail empire, and inspired by the sheer diversity of species that are unique to the tropical island she lives in, Otara’s commitment has never wavered.

Following the strategic divestment of Odel in 2014, Otara initiated the Otara Foundation for the specific purpose of providing an umbrella framework through which an organisation funded by her could dedicate itself to the betterment of Sri Lanka. In its investigations, support of litigation and prolonged fight for the passage of the Animal Welfare Bill, Otara’s work brings together many animal rights groups, activists and international organisations with a common platform through which all parties can work together to make a difference.

Sri Lanka, following years of civil conflict, now finds itself in a different crisis, where political decision makers seek an aggressive development agenda, neglecting in its wake moral values and community spirit, which Otara believes is reflected in the increasing cruelty toward animals. Otara’s outspoken, honest call for better protection has significantly contributed to keeping animal rights at the forefront of public interest.

Her hands-on approach to animal welfare allows Otara the ability to personally participate in change wherever she can. Her home in Colombo now has 7 rescued dogs, while her family home in the south has more dogs and two cows rescued from slaughter. Being the change is not only the mandate of her work at the Otara Foundation, it is also a practice that she continues to disseminate personally in all that she undertakes.

Embark, the Passion project of Otara Gunewardene and the pilot initiative of the Otara Foundation is entirely dedicated to the welfare of street dogs in Sri Lanka. It currently manages a network of over 1000 volunteers throughout the island, a mobile veterinary service and rescue unit, partnerships with over 100 qualified professionals and several animal hospitals, all partially funded by the retail merchandise available at Embark stores island wide.

Otara remains a strong proponent of the Animal Welfare Bill and continues to call for its passage into law in Sri Lanka.

Otara with Indi who has been held captive for over 40 years. Otara’s dream is to free Indi one day 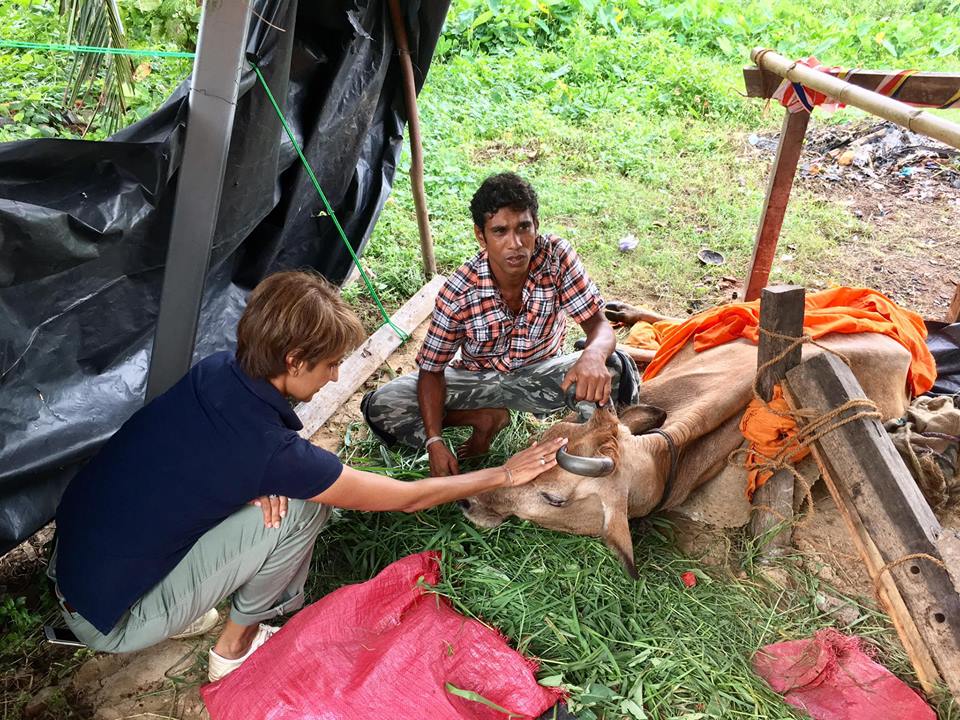 Otara has a deep-rooted connection with nature, as a childhood spent outdoors in an island rich in biodiversity gave her an early appreciation of the magnificence of her natural environment. From climbing trees at home in Colombo to appreciating the glorious flower gardens of Nuwara Eliya to experiencing the vastly diverse wild landscapes of Wilpattu, Yala and other protected areas in Sri Lanka, Otara makes time to appreciate the natural heritage of her country.

A keen follower of global trends in environment protection, Otara has in recent years, dedicated increasing resources toward the protection of Sri Lanka’s natural heritage and all that it encompasses. Understanding that successive national governments continue to devalue the link between economic prosperity and conservation economics, the work of the Otara Foundation in the arena of Environmental Protection has been to support both publicly and via investment, the work of conservationists and environment-based non-profit organisations in Sri Lanka.

Most recently, Otara worked with a network of conservationists, national media and grass roots activists to counter the state’s move to increase development and provide housing within Wilpattu National Park – a deforestation scheme destined to have dire consequences on the natural environment of the bio-rich area.

Press conference to stop the deforestation of Wilpattu

The organisation works closely with several sectors of society and draws media attention to destructive development projects within Sri Lanka. Determined not to simply defend our environment, Otara spends time and resources speaking out publicly as well as pushing forward small organisations and groups attempting to reverse the tide. Accordingly, the organisation invests in replanting, awareness and regional management of community based environmental upliftment programs.

Otara is the Sri Lankan Brand Ambassador of Earth Hour, a network promoted in 100+ countries to unify the agenda of environmental protection.

“We are what we eat”

She agrees, in line with global trends and the dangers of mass consumerism.

Much like most Sri Lankans, Otara grew up on a diet of ‘rice and curry’, which remains her favourite lunch almost every day of the week. The national diet is rice based and coconut rich, with little (yet increasing) dependence on gluten and dairy. There’s a smorgasbord of good choices in the natural food of the land yet increasingly, incorrect nutritional advice and a lack of knowledge has led to a population that is increasingly subject to illness as a result of diet. Even in these times, sugar is the leading cause of amputation in Sri Lanka. An increasing dependence on fast moving processed goods and general lack of knowledge on ‘good fat’ versus ‘low fat’ has contributed significantly toward non-communicable illnesses.

With so many contributory factors effecting the health of the general population, Otara has for many years advocated traditional dietary practices and natural, local produce. As advanced nations now trend toward sustainable ‘whole’ foods, bringing into the forefront of western culture Sri Lankan superfoods including Gotukola, Murunga, Jackfruit and the ubiquitous coconut, on this island the strength of natural produce is slow to be appreciated. With this in mind, Otara collaborates with famous Sri Lankan culinary artist, Chef Publis, of the iconic Mount Lavinia Hotel to promote via her media the benefits of Sri Lankan produce and how best to prepare it.

Otara believes that in its most authentic form, the staple diet of Sri Lanka needs little interference to restore nutritional balance to its people. Awareness of our global strength in nutrition is a focal area of both Otara and the work of the Otara Foundation.

Otara Gunewardene offers education and awareness on the relationship between health and nutrition, as a quiet yet proactive call to holistic empowerment based on the ancient traditions of lives historically lived well in paradise.

While it was the world of high fashion that first sparked Otara’s interest in cutting edge design, it has always been a unique method by which she offers her discerning eye to the development of design and craftsmanship in Sri Lanka. With this in mind, she launched ‘Luv SL’ at Odel to promote Sri Lankan arts and crafts and unique Sri Lankan souvenirs that promote the island via a positive, internationally marketable product range.

From the first line of t-shirts at Odel which fast became iconic to her signature black and white aesthetic that set a precedent in the local branding of clothing, Otara has created an identity via apparel manufacture that continues to influence retail today. Throughout her career, she advised, negotiated and developed the skillsets of artisan Sri Lankan designers at both executive and rural levels, strictly adhering to ethical trade practices at all times. In design, Otara carved a path that no other Sri Lankan has yet to match, carrying with her the livelihoods of many, that continue to be sustainable and progressive to the nation.

Today, Otara’s retail brand Embark is dedicated to fast moving lifestyle products and price points that prioritise earnings for Embark’s considerable welfare operations. The Otara Foundation contributes to educational programs and develops local design and craft. Embark stores continue their transition to ‘Made in Sri Lanka’, empowering development in design to a level where it can illustrate not only sustainable creativity but a unique island spirit. The challenge of merging Embark’s necessary consumables with a lasting progression toward ethical design remains a welcome challenge in capacity building for the Otara Foundation.

Embark’s eco-friendly, reusable tote bags made by the Chitra Lane School for the Special Child

Souvenir concept stores created by Otara during her time at ODEL

Otara appreciates that theatre, music and visual arts can transcend all boundaries. Through art, there is unity and the ability to communicate messages and ideals in ways that only the true artist can inspire.

Attending and supporting as many variations of the Arts as she can, Otara’s favourite performance remains the bi-annual play and theatre production by the Chitra Lane School for the Special Child, the educational institute founded and managed by her mum.

Dance performance by the children of the Chitra Lane School

It is the vision and mandate of Otara Gunewardene that through education and responsible enterprise, all things are possible. While proud that Sri Lanka holds one of the highest national literacy rates in the world, Otara is mindful of the fact that gaps in educational policy and procedural administration have often made it difficult to create a productive learning environment that celebrates the individual talents of each child. Additionally, the lack of a framework for rural enterprise management and administrative failures to teach environmental sensitivity, basic waste management and even the importance of hydration and proper nutrition have detrimentally impacted many on the island. Thus, a primary agenda of the Otara Foundation is Education for Empowerment.

Otara, in addition to several mentorship programs island-wide, supports schools in rural communities and celebrates individuality and diversity within the school system as much as possible. Her formative years spent at the Chitra Lane School founded by her mother, Otara sees no difference between people, appreciating that a child does not necessarily have to be academically strong to be uniquely talented. Celebrating diversity and inclusive education continues to drive Otara and the message she brings the next generation of our nation’s children and educators.

To live compassionately, to be mindful and to be considerate of the feelings of others are fundamental values by which Otara was fortunate to have been raised. These values are reflected in her work and leadership. 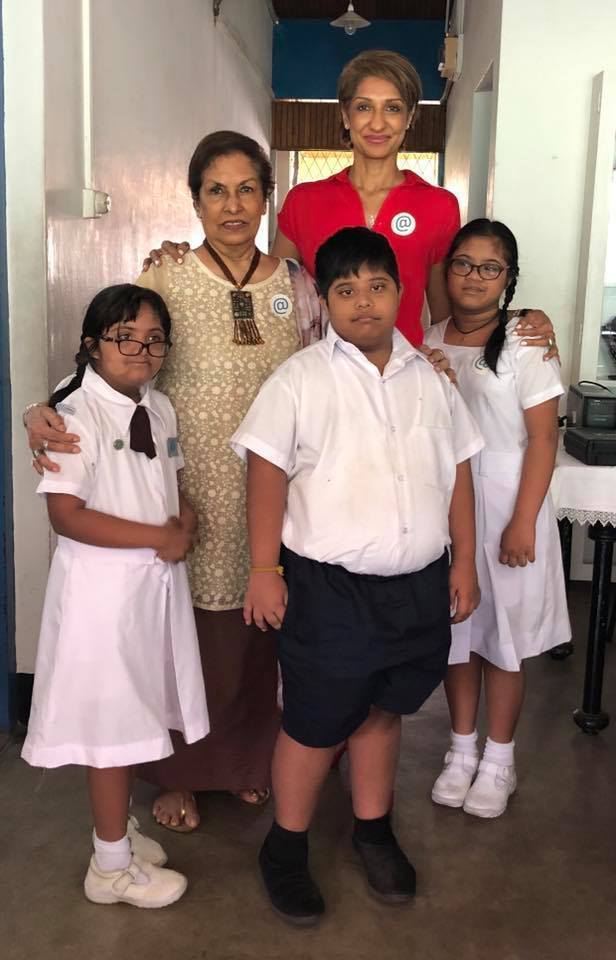 Otara with her mother, Delysia, the founder of the Chitra Lane School, with some of her students 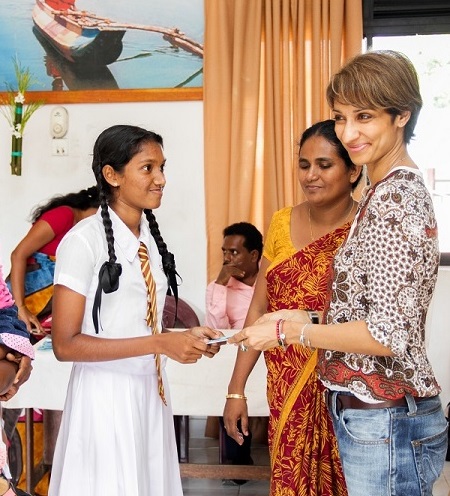 Otara presenting certificates to students who participated in a reforestation program

Otara participates for the Science Day at Maliyadeva College

Otara proves that with hard work and integrity, anything is possible in business and beyond. Through her work, many an individual, community and skillset have been nurtured and developed. She has offered employment to thousands, keeping her employee cadre to at least 50% women at all times. Giving equal opportunity to all, Otara’s organisations always reflect a cross cultural workforce where diversity is celebrated.

Otara with some of her passionate team members at ODEL

These roots of leadership are especially valuable now, Otara believes. Even more so because not every person in Sri Lanka has access to the same opportunities. Capacity building and supporting the diversity and importance of small businesses drives the work of the Otara Foundation.

Many institutions, non-profits and start-ups have benefitted from Otara’s mentorship and investment and she continues to choose projects carefully, uplifting as many people as she can within her scope of work.

Powered by  - We Are Designers